Chitosan is made in accordance with the principles of Traditional Chinese Medicine (TCM). Tiens Chitosan is a formula that effectively supports slimming diet. On the one hand it reduces the calorie value of the diet thanks to its unique ability to bind fat particles. On the other hand, by swelling in the stomach it fills it and as a result defeats hunger.

DESCRIPTION
Chitosan together with cellulose are the most abundant polysacccharides (complex carbohydrate) on earth. It is made from chitin found in the shells of crustaceans, insects and in the cellular walls of some fungal species. As a natural compound, it is non-toxic and biodegradable, completely safe for the environment. This is why it is becoming widely applied not only as a supporting agent in dieting, but also in human and veterinary medicine, cosmetology or biotechnology in the broad sense. Nutrition specialists tend to call chitosan the sixth - after proteins, fats, sugars, mineral compounds and vitamins, life-essential element.

INGREDIENTS
Tiens Chitosan is produced from the shells of red leg crabs. It is characterized by a very high - 85% degree of chitin deacetylation. The higher the deacetylation degree of this organic compound, the stronger the biochemical activity of the obtained chitosan. Hence, the formula is remarkably effective.

Chitosan present in the preparation is not digested nor absorbed by the human body. After entering the stomach, it significantly increases its volume in the presence of water, and effectively stops hunger. Additionally, chitin fibers wrap themselves around fat molecules, which renders them undigestible for the digestive enzymes. One chitosan molecule binds few times more fat compared to its own weight, and the bound fat is later excreted from the body. At the same time, the substance does not limit the absorption of fat-soluble vitamins A, D and E, which has been confirmed by scientific research.

Chitosan is an anti ageing product that acts at the cellular level of the human body, repairing and reinvigorating the system by:

Who Chitosan Capsules is suitable for?

IMPORTANT NOTE
Chitosan and doses of other medication or preparations are to be taken 2 hours apart, since being absorbent, chitosan can reduce their assimilation. 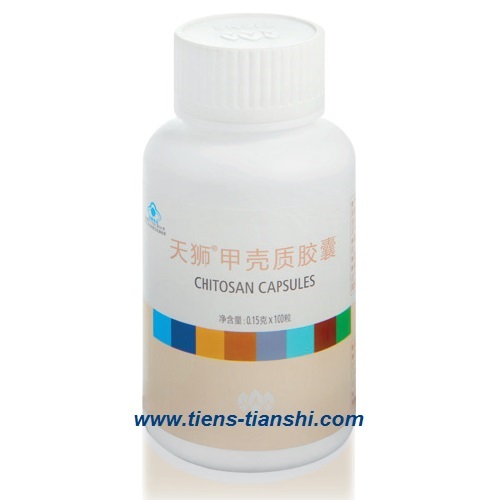