Chitosan is a naturally occurring substance, a plant fibre chemically similar to cellulose. Unlike regular plant fibre, chitosan has the ability to significantly absorb and bind fat in the digestive tract. This prevents fat absorption. Additionally, used as a fibre, chitosan can also produce a bulking effect that increases satiety.

Chitosan acts as a soluble fibre in the acidic environment of the stomach and interacts with dietary fats. As it goes through the small intestine, it becomes insoluble and forms a gel-like complex. This makes the intestine less acidic, as chitosan binds with fats and bile acids to form a gel-like complex, in turn leaving the fat indigestible.

This insoluble complex then passes undigested through the large intestine and is then naturally eliminated. Part of its effectiveness is based on the fact that bioadhesive chitosan carries a positive charge, which enables binding with negatively charged surfaces, thus fatty and bile acids. A decrease in bile activity also indirectly reduces fat absorption.

Additional Benefits
Tiens Chitosan Plus is a chitosan obtained from non-animal sources, and is suitable for vegetarians. It is also superior to common chitosan sourced from crustacean shells, due to an increased absorption rate. 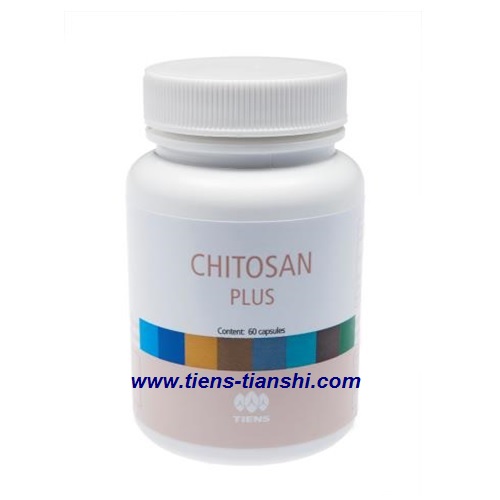