In modern, developed societies, consuming the right portion of dietary fiber in a day is as important as getting the right amount of complete protein, unsaturated fatty acids, oligosaccharides or essential nutrients like vitamins and minerals. Why is that so, if dietary fiber is the part of plant foods that pushes through our digestive system, leaving it basically indigested? To make it more understandable, dietary fiber  can be compared to a busy janitor, who cleans, safeguards and maintains our digestive tracts in good condition. But the problems start when there is no caretaker to look after our digestion. Also, fewer and fewer people look after their diets and get enough dietary fiber.

According to modern dietetics, there are two types of fiber: soluble and insoluble. The first type is described as soluble, because when dissolved in water, it becomes gummy and viscous. That fraction of fiber possesses the ability of binding fats and eliminating them from the digestive tract, when in excess amount. Thanks to its soluble nature, fibers like pectins, gums, fructo-oligosaccharides and some hemicelluloses can promote reduction of cholesterol and help to regulate the body’s use of sugars.

Certain soluble fibers like fructo-oligosaccharidescanbe referred to as prebiotics. Fructo-oligosaccharides pass undigested into the colon where they are fermented by a "friendly" bacteria, promoting their growth. These “friendly” bacteria boost intestinal immunity and prevent inflammation, diarrhoea and other intestinal conditions.

Consuming the right portion of fiber can also help us control our weight. Insoluble fibers with the added bulk effect, help us feel full for a longer period, which makesus eat less.

An average woman should eat about 25 grams of dietary fiber a day and a man at least 35 to 40 grams.

Double Cellulose is a blend of different types of dietary fiber, including valuable sweet corn (maize) cellulose with addition of powder from hawberry.

Sweet corn has high amounts of both insoluble and soluble fiber. A single cup of fresh corn kernels contains approximately 4.3 grams of fiber. Soluble fiber from corn can be metabolized by intestinal bacteria into short chain fatty acids. A recent research has proven, that when consuming the a daily portion of soluble fiber from sweet corn, we support the growth of “friendly”bacteria in our colon. These “friendly” bacteria in our digestive tract transform soluble fiber into short chain fatty acids, which later supply energy to our intestinal cells and thereby help lower our risk of intestinal problems.

Hawberry, better known as Chinese hawthorn fruit (Crataegus Pinnatifida) contains many important vitamins, tannins and other valuable substances (e.g. saponins, flavonoids, phytosterols). Its properties have been utilised by natural medicine for centuries. It is thought to have a broad spectrum of activities: regulating the function of the heart, increasing coronary artery blood flow and providing sedative effect on the central nervous system and digestion.

In Chines traditional medicine, hawthorn dried fruits known as shanzha, have been known for millennia and primarily used as a digestive aid.According to the legend, in the era of the Tang Dynasty (618-907 AD), the beloved concubine of Emperor Xuan Zong - Yang Yuhuan become sick and was suffering from indigestion, diarrhoea,bloating and loss of appetite. The emperor, very concerned about her health, ordered the doctors to save her life and provided the best available treatment. Doctors tried everything, but with no visible effect. In the mid-autumn, a Taoist monk who visited the Emperor’s palace, claimed to be able to cure Yang Yuhuan. Having looked at her, the monk gave the following recommendation - "Ten pieces of fruit ShanZhashould be cooked with a bit of brown sugar and drank three times a day before meals." Then he went away, leaving the emperor full of doubts. After two weeks, when Yang Yuhuandrank the soup the monk recommended for two weeks, she miraculously got cured.

The ingredients of Double Cellulose have the following properties: 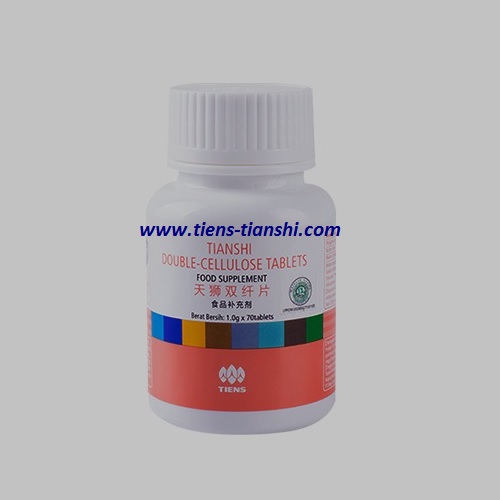